FAKE: Biden sworn in as ‘president’

In fairytale world everyone is happy and relieved that Joe Biden has been installed as ‘president’. No one wonders what exactly happened and why.

What the media served us was nothing but a prerecorded Hollywood’ish impression of the biggest crime in American history, trampling the US Constitution. Communists, satanists and pedophiles were all there, you know why Trump wasn’t there. And traitor Mike Pence was.

The fraud continues and seems unstoppable. The new ‘president-non-elect’ signs one Executive Order after another and canceling many of his predecessor’s Executive Orders. He can save himself the trouble as they will never go into effect.

The real orders are being handed out by Trump’s appointees Chris Miller of Defense, Pete Gaynor of FEMA and Michael Ellis of the National Security Agency.

The Pentagon blocked members of Joe Biden’s administration from gaining access to critical information about current operations, including the troop drawdown in Afghanistan, upcoming special operations missions in Africa and the Covid-19 vaccine distribution program, according to new details provided by transition and defence officials. 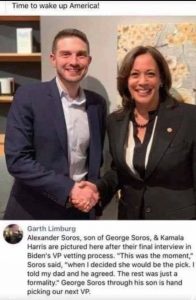 For those who hadn’t already noticed how someone is selected for the second most important position of vice president, who finds himself a heart-beat away from the presidency and his nuclear football: it’s a Soros administration.

The phenomenon of democracy has nothing to do with elections and visions, the self-proclaimed chosen ones set the course.

Who controls the nukes has the power. Hence Trump took the suitcase with nuclear codes on Air Force One to Florida and handed it over to the militairy at Joint Base Andrew, Maryland, to prevent China Biden getting his hands on it. After the Antifa ‘storming’ of the Capitol on January 6 we heard Pelosi screaming that Trump might use nukes, which of course was rubbish.

The huge number of troops in Washington consists not only of police, but also of the Marine Corps, National Guard and Special Forces, 60,000 troops in total. Something is going on in the background.

Presumably Biden has been sworn in as president of Washington DC (Corporation), which has been declared bankrupt. The unreal play fits perfectly into that scenario.

That’s also why it was possible that for 17 minutes there were 2 presidents, Biden of the empty estate and Trump of the restored US Republic.

At noon, the military and FEMA took over and Trump is resigned and Biden is a headless chicken.