We are in the final phase of the movement to ‘The Great Reset’; We must win now or lose forever

The Covid fraud has frightened, demoralized and trained the naive and the ignorant, in addition to triggering a mass of jab-induced illnesses and deaths. The climate change fraud has created a population full of unfounded fear. And now the deliberately created hysteria over the Russian invasion of Ukraine has led to massive fuel and food shortages that will result in hundreds of millions of deaths.

By Dr. Vernon Coleman – The hysteria was composed, orchestrated and led by the usual suspects in the media, with the BBC and The Guardian at the forefront. The BBC has long ceased to be a news provider, but a propaganda unit – denying, suppressing or distorting the truth with pride rather than regret or shame. (When the BBC proudly announced that it had not conducted interviews with doctors questioning vaccination, it abandoned all claims to be a news organization.)

The story being told by the media is that Putin is a threat to democracy. If anyone can find evidence of any democracy in the West, I would be grateful if they could point it out to me. Where is the democracy in Canada? In Australia? In New Zealand? In the United Kingdom? In the USA? Anywhere else?

Freedom of speech died in February 2020 and has not been seen since.

You have to be as naive as a five-year-old not to realize that the West planned this war; manipulating Putin into position like a chess piece.

There have been dozens of wars, invasions and massacres in recent years, but never before has there been such mass hysteria. Never before have politicians with colored favors supported their favorite side in the conflict. I don’t recall the establishment being much concerned when the Americans and British killed a million babies in Iraq. I don’t recall the media complaining about our attack on Libya.

Sainsbury’s, a British grocer, says it stands by the people of Ukraine. I don’t recall them uniting with the people who are dying in numerous other conflicts.

You have to be blind, stupid, or bought to not see that the conspiracy is unfolding and the end game is fast approaching.

And yet blindness, stupidity and corruption are the order of the day.

For example, the authorities now claim that covid can shrink the brain. The paid media commentators ignore the fact that it has been known for months that it is the covid-19 shots that cause brain damage.

The official line is that the only real sign of Long Covid is a loss of smell. And that is almost certainly a result of olfactory nerve damage due to the lousy PCR tests.

The official position is that cricketer Shane Warne died of a congenital heart problem. No officially acceptable commentator has even suggested that there might be a connection with his covid-19 injection. And no one in the mainstream media has questioned the conclusion that yet another super fit professional sportsman has suddenly developed a fatal, previously unsuspected congenital heart problem. Even Shane Warne never managed to turn that much.

Any rabid pro-vaxxer who does not wonder for at least a moment whether Mr. Warne might have been killed by the covid shot is an idiot. Any doctor who doesn’t wonder how many people are killed by the syringes should be struck off the doctors’ register for stupidity.

The Canadian province of Quebec is going to charge its most intelligent residents a special covid health tax. The 13% of Quebec who were wise enough not to be vaccinated with a toxic drug will have to pay additional taxes – presumably to help pay for the extra health care needed for the less intelligent and less knowledgeable residents who succumbed to the pressure and allowed themselves to be poisoned.

The Premier, Francois Legault, admitted that the bullied and simple souls who had received the injection had “made sacrifices” and were “owed this kind of measure.”

At least he acknowledged that getting the toxic, experimental prick was a sacrifice. 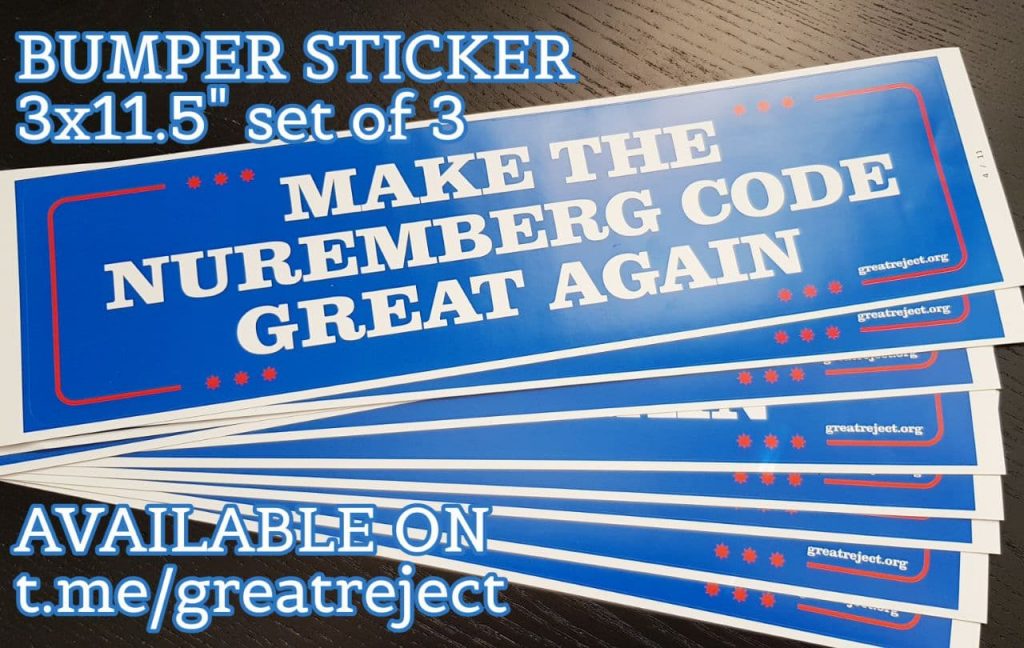 Deal of the Day: “Bumper Sticker Nuremberg” set of 3, specify your order with ‘BUMPNU’ as note on the order form: https://donorbox.org/deal-of-the-day

Everywhere you look there are signs that the conspirators are casting the net.

Stock prices around the world are collapsing while the price of oil and gas continues to rise. Everyone hoping for a pension is affected. Council workers who think their pensions are safe will lose out because many local governments have made reckless investments that are now collapsing in value.

Local councils everywhere are doubling the price of parking tickets – all part of the synchronized plan to bankrupt local businesses and all part of the Agenda 21 process of economic destruction.

Uninformed citizens everywhere are reacting to the media onslaught and demanding that Russian oil and gas be banned. I wonder how many of the people who complained that Shell bought some Russian oil will complain when there is no fuel for their cars or for their heating.

The media proudly proclaim that motorists will make fewer and shorter trips. That’s great if you don’t mind walking or biking 10 miles round trip to the stores. Rural communities will die a thousand carefully planned deaths. And the elderly and infirm will be left in their homes. It’s all part of the plan, of course.

In Scotland, it will soon become legal for schoolchildren to change sex if and when they feel like it – without a medical diagnosis. Boys will no doubt change into girls on Thursdays so they can use the girls’ changing rooms for PT classes. And then they’ll change back on Friday so they can play soccer and avoid the 21st century equivalent of home economics.
They are already talking about tighter controls on the Internet. (As far as I’m concerned, the controls can’t be much tighter. I’ve been banned from every social media site I’ve ever heard of). How long before websites disappear for good? I’ll be surprised if we’re still around in six months.

Most of the big investment companies (especially in the UK) are keen to ban Russian oil and gas to please the global warming cultists who have acquired far more power and influence than their numbers warrant. The shortage of oil will mean, among other things, that farmers will no longer be able to afford fertilizer. Food supplies will collapse.

Recent research shows that the education system in the UK has been carefully and systematically and deliberately destroyed in recent years. About half of all British adults can do math as an elementary school child. Only one in five adults in the UK is functionally numerate. Because of this ignorance, people are easily misled by misinformation spread by the BBC, other media groups and government advisers.

Governments and media are stirring up the people for a long war. We have been told that the war could last as long as ten years or more. How did Orwell know that?

The conspirators are sowing hatred and demonizing peace-loving citizens everywhere. It all reminds me a bit of that once popular TV show “The Price is Right. Before the show started, a warm-up made the audience frenzied. That’s what’s happening now. Boo and hiss when you see a Russian.

Hundreds of millions will die of starvation in Africa, but Black Lives Matter protesters will be too busy whining about statues to notice.

The conspirators know that China has been stockpiling food and metals for months. The Chinese are not interested in global warming nonsense. They build coal-fired power plants and allow families to have three children.

China and Russia are partners, and the conspirators know that if the Chinese and Russians do not join in the Great Reset, the West will only shrink – and be weak and vulnerable.

And so the hatred, fear, and anger against Russia (and China) will be increasingly fueled.

The war is real enough, of course, but it is being used (and was probably provoked) by the conspiracy theorists; the evil billionaires whose plan to take over the world may sound like something out of an old James Bond movie, but it is very real.

We are in the final stages of the movement toward the Great Reset.

We win now or we lose forever.

And to win, we must explain to everyone we know or meet what is happening and why.

Vernon Coleman’s book Endgame, available as a paperback and eBook, explains the background to the Great Reset, explains what is happening and what they have planned for us.