The same shady people own both Big Pharma and the media

What do The New York Times and a majority of other legacy media have in common with Big Pharma? 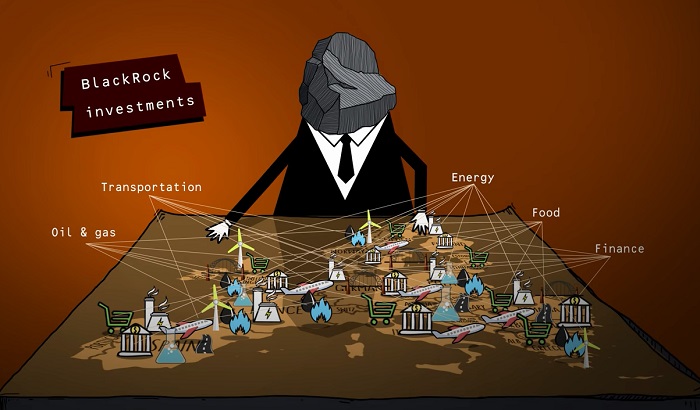 Answer: They are largely owned by BlackRock and the Vanguard Group, the two largest asset managers in the world. Moreover, these two companies appear to form a secret monopoly that also owns just about everything you can think of. As shown in the video[1,2]:

The power of these two companies is beyond your imagination. Not only do they own a large portion of the shares of almost all major corporations, they also own the shares of the investors in those corporations. This gives them a complete monopoly.

A Bloomberg report says that by the year 2028, these two companies will have combined investments worth $20 trillion. That means they will own almost everything.”

The word “Vanguard” means “the forward position in an army or fleet going to war” and/or “the leading position in a trend or movement.” Both are appropriate descriptions for this global behemoth, owned by globalists who are pushing for a Great Reset, with at its core the transfer of wealth and property from the hands of the many to the hands of the very few, reports Mercola.com.

Interestingly, as of March 2021, Vanguard is BlackRock’s largest shareholder.(3,4) However, Vanguard itself has a “unique” corporate structure, which makes ownership more difficult to discern. It is owned by its various funds, which in turn are owned by shareholders. Apart from these shareholders, it has no outside investors and is not publicly traded.(5) As shown in the video:(6,7)

“The elite who own Vanguard apparently don’t like being in the spotlight, but of course they can’t hide from those willing to dig. Reports from Oxfam and Bloomberg say that 1% of the world, collectively own more money than the other 99%. Worse, Oxfam says 82% of all money earned in 2017 went to this 1%.

In other words, these two investment companies, Vanguard and BlackRock have a monopoly in every industry in the world and they in turn are owned by the richest families in the world, some of whom are royalty and have been very rich since before the industrial revolution.”

While it would take time to sift through all of Vanguard’s funds to identify individual shareholders, and therefore owners of Vanguard, a quick glance indicates that Rothschild Investment Corp.(8) and the Edmond De Rothschild Holding are two of those stakeholders.(9) Keep the Rothschild name in mind as you read on, as it will reappear later.

The video above also lists the Italian Orsini family, the US Bush family, the British royal family, the du Pont family, the Morgans, Vanderbilts and Rockefellers as owners of Vanguard.

According to Simply Wall Street, as of February 2020, BlackRock and Vanguard were the two largest shareholders in GlaxoSmithKline, with 7% and 3.5% of the shares, respectively.(10) At Pfizer, the ownership relationship is reversed, with Vanguard the largest investor and BlackRock the second largest shareholder.(11) 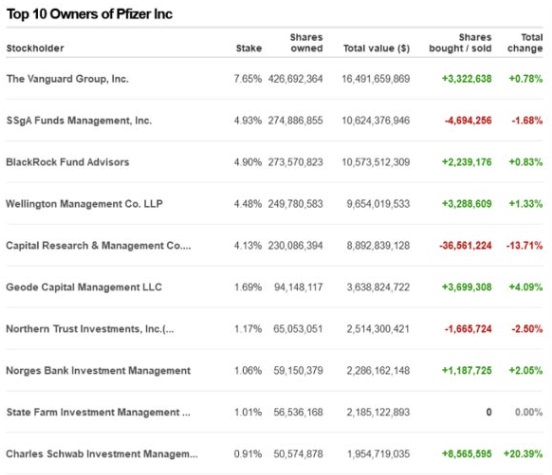 Remember that ownership can change at any time, as companies buy and sell regularly, so don’t get hung up on percentages. The bottom line is that BlackRock and Vanguard, individually and combined, own enough shares at any given time to say that they easily own both Big Pharma and centralized old media – and then some.

Why does this matter? It matters because pharmaceutical companies are directing the COVID-19 responses – all of which so far have endangered rather than optimized public health – and the mainstream media have been willing accomplices in spreading their propaganda, a false official narrative that has led, and continues to lead, the public astray, instilling fear based on lies.

To have any chance of rectifying this situation, we must understand who the protagonists are, where the harmful dictates come from, and why these false narratives are being created in the first place.

As noted in Global Justice Now’s December 2020 report12 “The Horrible History of Big Pharma,” we simply cannot allow pharmaceutical companies – “which have a long track record of prioritizing corporate profits over people’s health” – to continue dictating the COVID-19 response.

In the report, they discuss the shameful history of the world’s top seven pharmaceutical companies now developing and producing drugs and gene-based “vaccines” against COVID-19, while the mainstream media has helped suppress information about readily available older drugs that have been shown to have a high degree of efficacy against the infection.

In addition to The New York Times, Vanguard and BlackRock are also the two largest owners of Time Warner, Comcast, Disney and News Corp, four of the six media companies that control more than 90% of the U.S. media landscape.(15,16)

Needless to say, when you own that many news sources, you can control entire nations through carefully orchestrated and organized centralized propaganda disguised as journalism. 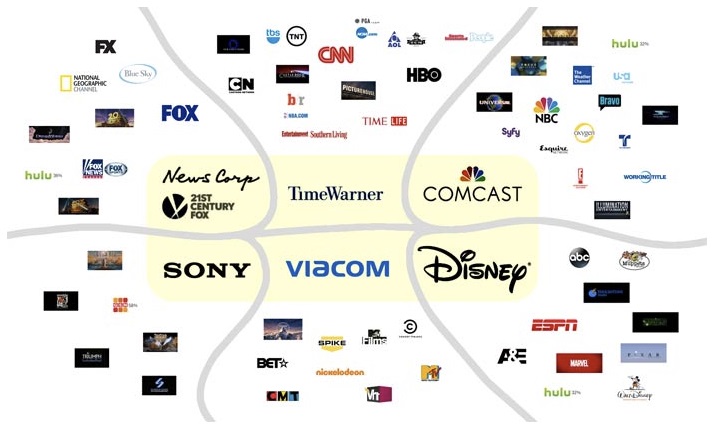 If your head is already spinning, you’re not the only one. It is difficult to describe circular and closely intertwined relationships in a linear fashion. The world of corporate ownership is labyrinthine and everyone seems to own everyone else to some extent.

The main message, however, is that two companies stand head and shoulders above everyone else, and they are BlackRock and Vanguard. Together they form a hidden monopoly on global asset holdings, and through their influence over our centralized media, they have the power to manipulate and control much of the world’s economy and events, and how the world sees it all.

Given that BlackRock announced in 2018 that it has “social expectations” of the companies in which it invests,(17) its potential role as a central hub in the Great Reset and the “build better back” plan cannot be overlooked.

Add to that information showing that it “undermines competition by owning shares in competing companies” and “blurs boundaries between private capital and government business by working closely with regulators,” and it would be hard not to see how BlackRock/Vanguard and their globalist owners might be able to facilitate the Great Reset and the so-called “green” revolution, both of which are part of the same asset theft scheme.

BlackRock and Vanguard own the world

That assertion becomes even clearer when you realize that the influence of this duo is not limited to Big Pharma and the media. Importantly, BlackRock also works closely with central banks around the world, including the U.S. Federal Reserve, which is a private entity, not a federal one.(18,19) BlackRock lends money to the central bank, acts as an advisor, and develops the central bank’s software.(20)

In total, BlackRock and Vanguard own some 1,600 U.S. companies, which had combined sales of $9.1 trillion in 2015. If you add the third-largest owner in the world, State Street, their combined ownership includes nearly 90% of all S&P 500 companies.

BlackRock/Vanguard also own shares of a long list of other companies, including Microsoft, Apple, Amazon, Facebook and Alphabet Inc.(21) As illustrated in the chart below of BlackRock and Vanguard’s ownership network,(22) which can be seen in the 2017 article “These Three Firms Own Corporate America” in The Conversation, it would be nearly impossible to list them all.

In total, BlackRock and Vanguard own some 1,600 U.S. companies, which had combined sales of $9.1 trillion in 2015. If you add the third largest owner in the world, State Street, their combined ownership includes nearly 90% of all S&P 500 companies.(23) 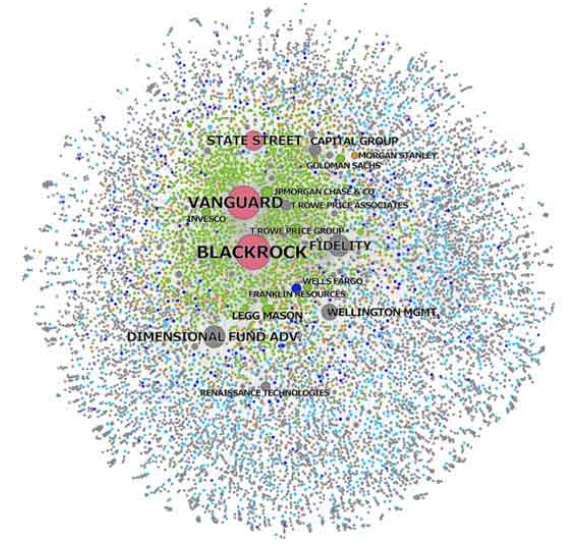 To map out the overarching influence of BlackRock and Vanguard in the global marketplace, be sure to watch the 45-minute video at the top of this article. It gives a broad overview of the hidden monopoly network of Vanguard and BlackRock companies, and their role in the Great Reset. A second much shorter video (above) provides an additional overview of this information.

How can we connect BlackRock/Vanguard – and the globalist families that own them – to the Great Reset? Barring a public admission, we must look at the relationships between these colossal globalist corporations and the influence they can exert through these relationships. As noted by Lew Rockwell:(24)

“If Lynn Forester de Rothschild wants the United States to become a one-party state (like China) and doesn’t want voting rights laws passed in the U.S. so that more voter fraud can be committed to achieve that goal, what does she do?

She holds a conference with the world’s top 100 CEOs and tells them to publicly condemn Georgia’s passing of an anti-corruption law as “Jim Crow” and she orders her dutiful CEOs to boycott the state of Georgia, as we saw with Coca-Cola and Major League Baseball and even Hollywood star, Will Smith.

In this conference call we see shades of the Great Reset, Agenda 2030, the New World Order. The UN, like [World Economic Forum founder and executive chairman Klaus] Schwab, wants to ensure that by 2030 poverty, hunger, pollution and disease no longer plague the earth.

To achieve this, the UN wants the taxes of Western countries to be distributed by elite mega-corporations to create a brand new society. For this project, the UN believes we need a world government – namely, the UN itself.”

As I have described in many previous articles, it seems pretty clear that the COVID-19 pandemic was orchestrated to bring about this New World Order – the Great Reset – and the 45-minute video at the top of the article explains well how this was done. And at the heart of it all, the “heart” where all global wealth flows to, we find BlackRock and Vanguard.