The net is buzzing: more and more often Tweets, Facebook posts and blogs are appearing in social media claiming that vaccine damage and vaccine deaths will not be reimbursed by insurance companies because vaccination is an “experimental therapy” that people do on their own and therefore insurance companies do not pay for.

In fact, if you enter the relevant search terms, you will only find articles that vehemently deny this and dismiss it as fake news thrown into the world by evil, right-wing vaccine opponents and Querdenkern [Cross-thinkers]. But it is that simple, even if the evidence is hard to find, Nikki Vogt writes.

Many factcheckers are up in arms and rejecting this news. Everything is completely false and baseless. Interesting: the statements on this are remarkably well worded and say precisely NOT that the insurance companies are liable. One example is the AFP news agency’s March 2021 “fact check.”

“Hundreds of users on Facebook and thousands on Telegram shared a claim by the vaccine-critical ‘Corona Investigative Committee’ in mid-March. Vaccinations, according to this committee, would lead to problems with life insurance, according to a video of the self-appointed committee. In an interview with AFP, both the German Insurance Association (GDV) and Germany’s largest life insurers, as well as the Association of German Policyholders (BdV) and the chair of insurance law at the University of Frankfurt and Düsseldorf, deny that there are currently disadvantages for life insurance policyholders due to vaccinations.”

“No downside at this time” … that is not a promise of defined benefit plans and so it runs throughout the report. Various umbrella organizations and specific insurance companies are asked. They all spread good vibes, but use suspect wording:

“As far as we know, there are no problems for vaccinated people in taking out or paying out life insurance.”

Bianca Boss, spokeswoman for the Association of Policyholders:

“There have probably been individual cases in the recent past where the application was rejected when taking out disability insurance and there was corona disease. We are not aware of an accumulation of cases, especially in the field of life insurance. Moreover, when taking out a life insurance policy, the insured must truthfully answer the questions in the application. This includes the question about medical treatments, which may include vaccination. But insurers also seem to handle this differently.”

Allianz’s head of life insurance communications, Franz Billinger, begins to philosophize about the different benefit objectives of different insurance policies, and then says:

“For such term life insurance policies, there is a clear answer: if vaccinations in general, and thus also the Corona vaccination in particular, are legally allowed, there are no fundamental problems for vaccinated persons with any payouts or benefits, and also no problems in taking out term life insurance.”

Yes, thank you, Herr Billinger. That means: IF the Corona vaccination is “legal”. That could be the sticking point. The vaccinations are conditionally approved. What does that mean? The only thing he is clear about is, “The alliance will also pay out if someone chooses not to be vaccinated and subsequently dies from Corona.”

AFP also inquired at the Institute for Insurance Law at the Goethe University in Frankfurt. Prof. Manfred Wandt is the president of the institute. He too spreads confidence, rejects the lawyer Reiner Füellmich, but says:

“According to § 158 VVG, such risky circumstances are only relevant in the case of a so-called risk change, which must have been expressly agreed upon as a ‘significant risky circumstance’ when the contract was concluded. For example, in a non-smoking tariff, the later inclusion of smoking,” Wandt explained. “I suspect that to date, insurance practices have not included Covid vaccine-related agreements in policies, and hopefully will never need to because of the intended effectiveness of vaccinations.”

Aha? “Will hopefully never be necessary because of the intended effectiveness.” An unquestionable promise sounds different.

The 43rd broadcast of the Corona Investigative Committee referred to here, in which international lawyer Dr. Reiner Füllmich says “First life insurance companies refuse payout after vaccination!” is of course blocked on YouTube, but can be found here on Odyssey.

“For what reason the death occurs, essentially does not matter. An exception applies only in the case of suicide (§ 161 VVG),” writes Looschelders.

And that is where the leverage lies. A court in France reportedly used this point for its decision when it ruled in favor of a life insurance company that refused to pay out on a policy because the person who had demonstrably died from the vaccination had thus voluntarily participated in a medical experiment, which amounted to suicide.

A concrete indication that, contrary to all denials, a French court did rule in this way in a case of vaccine deaths: The Facebook post of lawyer Carlo Alberto Brusa, who conducted the trial for the family.

“A wealthy, elderly Parisian businessman from Versailles, who took out many life insurance policies (worth millions) for the benefit of his children and grandchildren, dies from the effects of a Covid vaccination (not disputed by doctors or his life insurers). But then comes the judge’s hammer: the insurance company will not pay the premium because the deceased acted at his own risk in the Corona vaccination.”

From the court’s ruling, the site quotes:

“The side effects of the experimental vaccine have been published and the deceased could not claim not to have been aware of them when he voluntarily took the vaccination. There is no law or mandate in France that forced him to take the vaccine. Therefore, his death is essentially suicide.”

Which, as we know, is always excluded in insurance policies.

The same thing is happening in the U.S. right now. OneAmerica is a large life insurance company based in Indianapolis. The company’s CEO, Scott Davison, has just announced that the flood of life insurance payout claims resulting from the death of the insured shows that more and more Americans of working age between 18 and 64 are suddenly dying in unprecedented numbers. Mr. Davidson reports that consistently all life insurance companies (not just “OneAmerica”) are seeing mortality rates increase by 40% (!):

“To give you an idea of how bad this is, a three-sigma scenario, or a once in 200 year catastrophe, would be equivalent to a 10% increase from before the pandemic. Therefore, a 40% increase (in mortality) is just unprecedented.”

To be clear, these are not covid deaths. They are deaths due to vaccine-induced illnesses. A scientific study also confirms this huge mortality surplus in the US.

And so the Principia Scientific website from the US reports crystal clear that deaths from the Corona vaccine are not covered by life insurance there. Even with new applications for life insurance, insurance companies are asking questions about whether one has tested positive for Corona, is in self-imposed isolation, has symptoms, or has been in contact with people infected with Corona. These questions were already being asked in March 2021. It won’t be long before we see letters appear online regarding this issue.

Despite all the assurances from the insurance companies, these are already here: 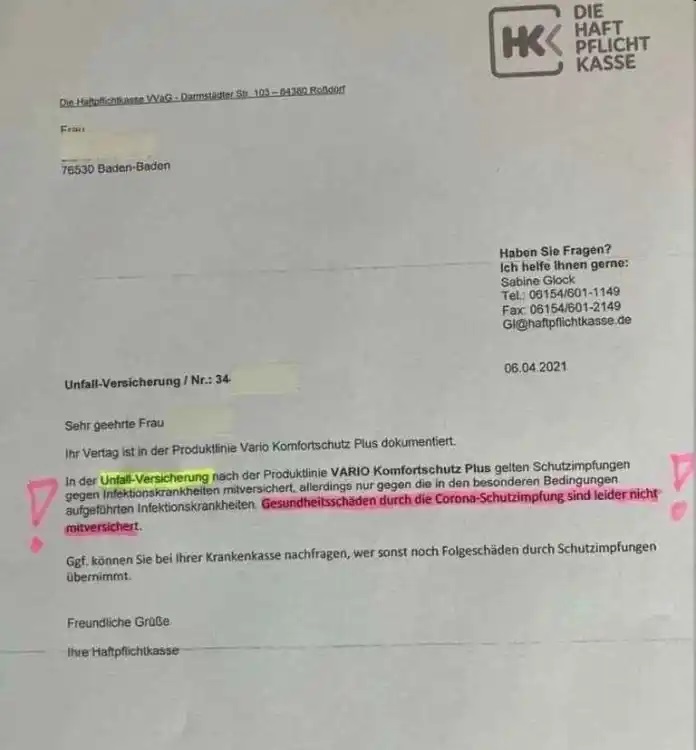 In accident insurance … Unfortunately, health damages resulting from corona vaccination are not covered by insurance.

This is not at all surprising and was actually obvious from the beginning. Since the pharmaceutical giants who produce the vaccine have been absolved of any liability by the governments, it is now assumed that the state intervenes. Normally, the causative agent, the manufacturer, is liable. The manufacturer is now exempt from any liability. So the state has committed itself.

“While many are waiting for their COVID-19 vaccination, there is a parallel discussion about possible harm from the vaccine. Videos of shivering vaccinees with neurological damage are circulating on the Internet, and there is talk of vaccine-related deaths. Skeptics say the vaccination is too fast, that the vaccines are genetically engineered, and that the effect cannot yet be assessed. In addition, reports of seniors who have died from Covid-19 despite vaccination are troubling because protection does not begin immediately after the first vaccine dose.

Manufacturers, vaccinators, and politicians affirm the unlikelihood of vaccine harm, even with the COVID-19 vaccination. Nevertheless, the Association of Insurance Professionals, for example, speaks of a “queasy feeling because of possible side effects.”

Well, well. One already has a queasy feeling in August. And then the BR contribution goes into another explosive aspect:

“The burden of proof is, in principle, on the injured party”

“Those seeking compensation bear the burden of proof, i.e., must show that the harm incurred is “in all likelihood” due to the vaccination that took place. Whether there is more evidence for a causal link between vaccination and injury than against it is precisely the bone of contention in everyday life that can end up in court.

From the point of view of the injured party, this can be time-consuming, as the courts depend on the opinions of experts. For example, the victims of the so-called “swine flu vaccination” had to wait more than 5 years for an expert opinion from the responsible Paul Ehrlich Institute until a causal link was confirmed.”

And again it is said that the state will compensate the victims of the vaccination. Only we hardly hear that this has happened so far. Oh well, that could take years. Somewhat naively, BR writes that the manufacturer is also liable, as is the vaccinator. That about the manufacturer is not true. And frankly, who knows the name of the doctor who put the needle in his upper arm at the vaccination center? Moreover – even if it were true – the doctor or clinic staff is only liable if the vaccination was not performed carefully and according to the state of medical science.

“For example, the doctor must identify past illnesses that may make the person unsuitable for vaccination and perform a fitness test immediately before vaccination. In addition, he must also provide information about all risks and side effects in the future.

Therefore, the Association of Policyholders warns of the risks of under-coverage to consumers. Because SARSCoV-2 is not included in many insurance rates, it’s worth reviewing the fine print.”

Do you notice anything, dear reader? Who is passing the buck here, why and to whom? And who ends up paying the bill?