The World Economic Forum (WEF) has played a bigger role over the past 15 months than many of you may realize, and now they have released a helpful guide for governments and public health officials around the world on how to coerce and manipulate the general public into getting the Covid-19 vaccine.

The WEF states in a recent article that in order to achieve herd immunity against the alleged disease COVID-19, public health officials should use the “advertising theory,” manipulate the way people think and feel about getting the injection, use community leaders and health workers to conduct propaganda, and offer bribes as incentives to “get skeptics through the doors of local vaccination centers.”

The advertising theory is based on the “Hierarchy of Effects Framework“, which suggests that “customers think first, then feel, then do.” The WEF believes that policymakers around the world are currently only catering to people who are already interested in getting the COVID-19 vaccination, so they recommend that in order to convince skeptics, officials resort to three simple methods of coercion and manipulation. 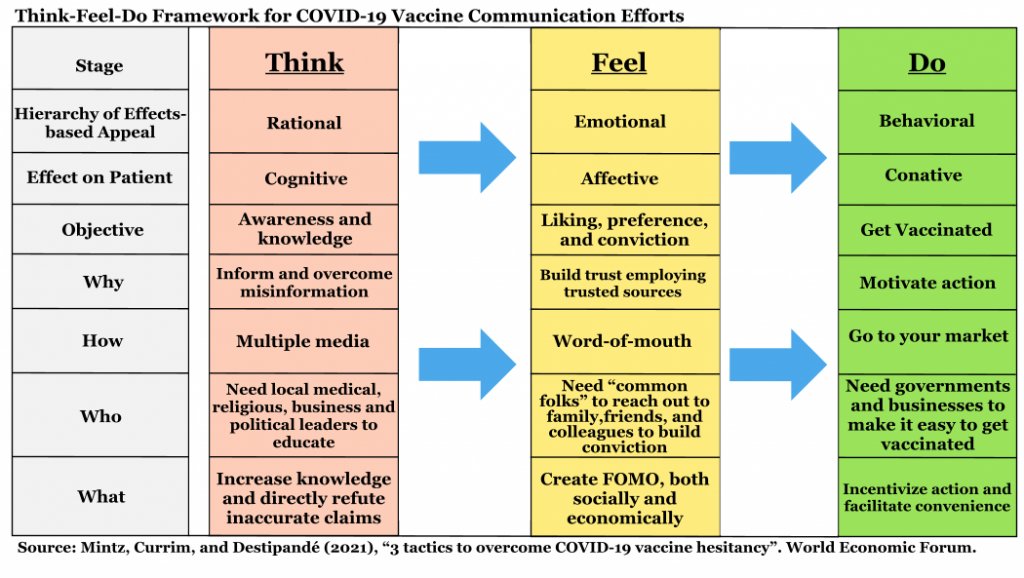 The first step the WEF recommends health officials take is to “increase knowledge and overcome misinformation.” This revolves around the “thinking” phase of advertising theory and states that local authority figures proactively reach out to skeptics and educate them through “media such as phone calls, direct mail, television, billboards and digital channels.”

The average time it takes for vaccines to be approved for the market is about eight years. Within 11 months after the COVID-19 vaccines were developed to, they began administering them to the general public, but even then they were not approved like other vaccines, but received emergency approval. Why were they only licensed for emergency use? Because they are still in the third stage of research and therefore experimental. The emergency approval means that the manufacturer of the vaccine cannot be held liable for any harm resulting from the vaccine.

As for underreporting of adverse reactions? Have you ever heard of the MHRA’s Yellow Card system? Many people have not and that is exactly why adverse reactions are underreported. Under the Yellow Card system, people can report side effects they have experienced as a result of the COVID-19 vaccines, and the MHRA itself believes that only 1% – 10% of side effects are actually reported.

This makes the actual number of adverse reactions and deaths reported under the program quite frightening when one takes into account the under-reporting. After all, according to the 21st update from the UK Government / MHRA on adverse reactions to the Covid-19 vaccines, there have been 973,425 adverse reactions, ranging from mild to very serious, and 1,356 deaths up to June 16, 2021.

The second step that the WEF recommends public health officials take is propaganda and intimidation. This revolves around the “feeling phase” of advertising theory and states that vaccine refusers should be bombarded with phone calls and conversations, and harassed on social media to persuade them to take the COVID-19 injection.

The WEF also suggests that another way to improve the state of mind of vaccine skeptics is to capitalize on the fear of missing out (FOMO), both socially and economically. To achieve this, the WEF recommends that public health officials use tactics that induce guilt and regret.

They suggest that this can be done in a similar way as was successfully done in Canada in the 1930s and 1940s to combat diphtheria. In that period, people used messages like “if your children die of diphtheria, it’s your fault because you chose not to make the effort to protect yourself from it.”

The problem here is that the COVID-19 vaccines do not prevent infection or transmission, so using messages as the WEF recommends is coercion and would not amount to informed consent, as the individual would instead have been extremely misinformed.

The COVID-19 vaccines have reportedly only been proven to reduce the risk of hospitalization or death from COVID-19, a risk that is already incredibly small for most people, averaging about 0.02%.

The limited tests that were conducted only measured whether or not a vaccinated person contracted a serious illness when infected with COVID-19, but these tests were flawed because no one was exposed to the virus during the study, they only measured what happened when they were in the general population.