Several doctors and nurses have noted that certain people who come into the vicinity of covid-vaccinated persons develop serious problems. Witnesses speak of large menstrual uterine blood clots, swollen testicles, etc. There are also reports of spontaneous miscarriages in women whose partners, for example, were vaccinated. 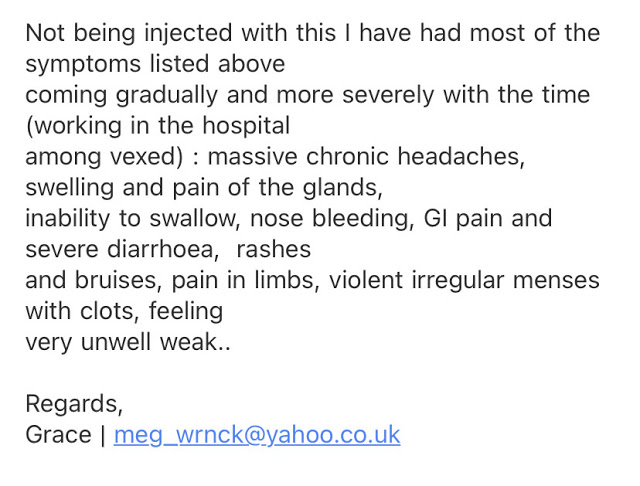 “Experts” all over the world, however, related this concern by saying that the amount of genetic instructions in the male and female reproductive system was so small that it would not be so bad. This resulted in the “science” that we did not have to worry about infertility or miscarriages in men and women. No studies were done, there was just an opinion that said that the genetic instructions on the proteins on the male and female reproductive system matched very little with the spike protein, that it couldn’t matter… That’s why now in women who get the injection, we see a huge increase (hundreds of percent) in miscarriages, and stillbirths. And what we’re seeing further is women who are around vaccinated women having this same experience, which raises the suspicion that not only is that mRNA causing the body to continuously produce spike protein, but it’s continuously excreting spike protein through breath, saliva, skin, and who knows where else. That’s just based on what we think we know now about what’s in these injections. But potentially there are other mRNAs in there, which if injected into the body will instruct the body to make all kinds of proteins that we don’t know about yet.

So what happens is basically this: an injected person makes a protein through the mRNA, against which antibodies are made. These are – as Dr. Tenpenny already explained – non-neutralizing antibodies, which have the potential of making a new infection much worse, but also of attacking organs and tissues in one’s own body. Molecular biologist Peter Borger said that what is actually involved is samRNA, or self-replicating mRNA. This mRNA will multiply enormously, producing very large amounts of spike protein. This spike protein, because it is in very large quantities in the muscle cells and eventually the bloodstream, can be excreted through the skin, etc.

The covid-19 vaccines are a particularly ingenious and nasty bio-weapon!

The vaccines are the real “pandemic” and the vaccinated will infect the unvaccinated with that nasty protein and spread the “pandemic”!

Indeed, this is the way to thin out the world’s population. Joseph Mengele and Adolf Hitler would blush!