The situation in Israel shows us how risky covid vaccinations are

In most countries, it is only slowly becoming apparent how great the risks are of the covid vaccinations. In Israel it is different now. In a short period of time a third of the population has been vaccinated with the Pfizer vaccine and the impact of this has been alarming. The enthusiasm for “a shot” in Israel is therefore quickly declining.

Israel was to serve as the figurehead for the global vaccination campaign. The plan was to vaccinate the entire population of 9.3 million in a short period of time. The campaign started at the end of December and 3.3 million Israelis have already received their first Pfizer injection and 2 million a second one (as of February 7).

Quite soon, alarming reports appeared on social media. Dozens of vaccinated people turned out to die just after the vaccination or in a few weeks later.

For that, see the video below. In it, the names of 28 deceased are listed and sometimes something of the circumstances surrounding their deaths is briefly explained.

Is this video an indication that something very serious is going on in Israel?
It could be, but it doesn’t have to be. After all, people die at some point. And some may die right after a vaccination.

This is also the argument that was spread by the government through the media at a very early stage – vaccination had yet to start – “don’t worry if this happens, it’s a natural phenomenon.

That may be so, but the developments in Israel give pause for thought if you dig a little deeper. On the Twitter page of former New York Times journalist Alex Berenson, I found a table that suggests that there is much more going on than a ‘natural process’.

This table concerns the side effects of the Pfizer vaccine in a group of a total of 22,631 people who were followed through the first week after the second injection. The table itself is not government-issued, but has been compiled from publicly available data. 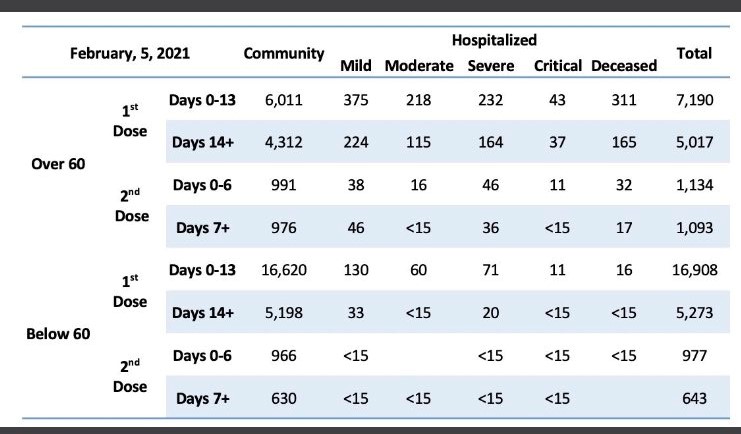 There are two groups: those over 60 (the “elderly and vulnerable”) and those under 60. In both groups, a subdivision was again made into periods. After the first injection, the survey was conducted twice and after the second also.

If these data are correct, then a disaster is unfolding in Israel. Then – at least in this group of over 12,311 people there is a situation where 4.4 percent of those over 60 die within about six weeks of the first injection.

My first impression after seeing these figures was that something had to be wrong somewhere.

Israel’s long-term mortality rate, which is the average number of annual deaths per 1,000 inhabitants, stands at 5. That works out to half a percent. For the 60-plus group, of course, it will be considerably higher, but 4.4 percent? 44 in 1,000? [*] And that too in such a short period of time? That’s not a normal mortality rate, not a “natural process.

Many serious side effects

Looking for more guidance, I stumbled upon two tables posted by physician Jeffrey Hirschfield on Twitter (Moderna here and Pfizer here). They seem to confirm the numbers in Berenson’s table.

The tables, which Hirschfield posted, compare the occurring side effects of the Moderna and Pfizer vaccines. Pfizer scores a mortality of 2.6 percent in this group (I’m assuming for a moment that this is a group with all ages). Moderna comes out at the even more frightening rate of 7.7 percent. And that is close to Berensen’s percentage.

Such percentages are catastrophic. They are far above natural mortality. And if they are based on truth, here we see an operation that seems to be aimed – what to call it – at the “involuntary, premature termination of life” of many thousands of elderly people.

If this data is correct then the question arises as to how in the world it is possible for governments to unleash vaccines with such devastating effects on their populations. Anyone who sees such figures and has the slightest inkling of what is going on would immediately ban the use of these – should they even be called vaccines? – for one more day.

The result of the wave of deaths and the many reports of side effects now circulating is that many Israelis are scratching their heads and the pace of the campaign is slowing.

Initially, the rate was 150,000 people a day. That had dropped to just over half, 87,000, by early February. People are canceling or postponing and then thinking three times about it first.

Prime Minister Netanyahu’s government responds with blackmail. For example, he stated that the strict lockdown that Israel has in place can only be lifted if at least one million more people are vaccinated.

Furthermore, a so-called green card is being developed that will give “fully vaccinated” (note the word fully here) access to restaurants, gyms and other services and facilities. Read: the unvaccinated remain subject to the lockdown.

It’s exactly what’s in the leaked roadmap of this pandemic that was published on TransitionWeb in late October last year.

A few more examples of this vaccine blackmail:

* The mayor of Jerusalem threatens Arab residents that they can no longer go to the mosque without a vaccination certificate.

* A colleague of his in another city announced that unvaccinated people will soon be unable to claim municipal services. Imagine: without pricks your garbage will no longer be collected, you can’t have your passport renewed or report the birth of your child.

And this list can easily be extended further. It is all about coercion and blackmail.

Of course, the Israeli government denies that the many deaths now being reported are the result of the vaccinations. They are blamed on Covid and on “underlying suffering”. The government even claims a great success because infections are said to have dropped. The media in our country reflect this Israeli government position.

But those who look a little behind this propaganda curtain are shocked. For example, watch the video below this article, in which the lawyer Tamir Turgal explains the situation in his country. In doing so, he clearly states several times that he cannot speak freely.

I think it is very likely that other countries also have to reckon with many victims and with a coercive and blackmailing government.

It’s one of two things: either the virus causes this destruction or the government does it itself using ‘the virus’ as a cover. Then the so-called ‘third wave’ is not a whim of nature (read: virus), but a man-organized calamity from an underlying political agenda.

This is no small thing. That is about whether we can continue to live in reasonable freedom or will be subject to an icy, inhumane dictatorship.

Jurist Tamir Turgal: “A small light pushes away a lot of darkness”