Second Nuremberg tribunal Has been Prepared

A class action, or representative action, is a lawsuit in which a large group of people collectively bring a claim to court, or in which a certain class of defendants is sued

Reiner Fuellmich  is getting that support from the thousands of lawyers worldwide to bring the Covid19 scandal set up in Davos to the tribunal.

Reiner Fuellmich is the lawyer who succeeded in co-convicting the car giant Volkswagen because of its modified catalytic converters.

And it is the same lawyer who succeeded in condemning Deutsche Bank as a criminal enterprise.

Deutsche Bank agreed to pay more than $130 million to resolve/buy off the case because of foreign corruption practices and fraud cases.

So now he faces his next job. The job of a lifetime, supported by thousands of lawyers and experts worldwide.

According to Reiner Fuellmich, all the frauds committed by German companies are nothing compared to the damage this Covid-19 scam has caused and continues to cause.

This Covid-19 crisis should be renamed the “Covid-19 scandal” and all those responsible should be prosecuted for civil damages resulting from manipulation and falsified testing protocols.

Therefore, an international network of corporate lawyers will litigate the biggest tort case of all time namely The Covid-19 fraud scandal which has since become the biggest crime against humanity ever.

On the initiative of a group of German lawyers, a Covid-19 commission of inquiry was set up with the aim of bringing collective action on an international level on the basis of Anglo-Saxon law.

The hearings of, among others, hundreds of scientists, doctors, economists and lawyers of international repute conducted since October 7, 2020 by the Berlin Commission of Inquiry into the Covid-19 affair have now demonstrated with a probability approaching 100% certainty that the Covid-19 scandal was never a health issue – Dr. Fuëlmich on February 15, 2020

Court sessions can be found here

“Rather, it was a matter of strengthening power, illegally obtained by criminal methods of the corrupt ‘Davos clique’, by transferring the wealth of the people to the members of Davos on the backs of small, and especially medium-sized businesses, among others.”

The committee’s conclusion is that Covid-19 is being used as a diversionary tactic by business and political “elites” with the goal of shifting market shares and wealth from small and medium-sized businesses to global platforms such as Amazon, Google, Uber, and other big tech and multinational corporations. 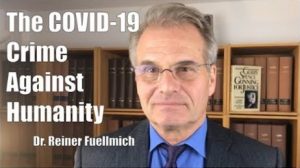 Platforms such as Amazon, Google, Uber, and other bigtech have thus appropriated their market shares and their wealth

“We have seen what has been confirmed time and time again: the dangerousness of the virus is about the same as that of seasonal flu, regardless of whether it is a new virus or whether we are simply dealing with an influenza renamed Covid-19 pandemic.”

Meanwhile, Drosten’s PCR tests can tell us nothing about contagious infections. The test is simply irrefutably proven NOT to be made for that and incapable of doing so.

To make matters worse, the health and economic damage caused by the anticovid measures is so devastating that it is necessary to speak of a historically unique level of destruction.

To panic the population, dangerous and harmful containment measures were introduced (even by the WHO) such as the mandatory wearing of a useless and dangerous mouth mask and social distancing. Useless and counterproductive. So the population was “ready” for the injections.

The world’s population served as guinea pigs for these experimental injections of genes, both gradual and extremely rapid.

Meanwhile, more and more people, and not only lawyers, are demanding, in addition to the immediate termination of these lethal measures, a judicial review by a truly independent international tribunal, on the model of the Nuremberg trials.

An example of such a request by English physician Dr. Vernon Coleman: video

Moreover, an interview with a whistleblower from a Berlin retirement home reveals that of the 31 people vaccinated there, some by force and actual violence in the presence of Bundeswehr soldiers, while their (useless) “test” was negative prior to vaccination. Eight people have now died and 11 have serious side effects.

What is really at stake?

To fully understand what is at stake with this new Nuremberg tribunal to try the greatest crime of all time, we must start with the lie of Drosten and the Corman-Drosten paper about the PCR test in the name of Davos… One of the grossest lies in history that has done improbable damage and has everything attached to it.

Then Klaus Schwab, the great architect of this gigantic hostage situation, the sponsors of the financial oligarchy, the politicians at the head of the EU armed with the implementation of Drosten’s guidelines and WHO was what led to all Western governments making the devastating decisions about containment, curfews, mandatory mask wearing, social distancing and other draconian measures against a non-existent danger.

On top of that people are motivated to get vaccinated based on a lie. If that doesn’t work then governments will force the populations. Directly or indirectly.

“These are the truths that will take off the masks of those responsible for the crimes committed“, says Dr. Fuellmich,

And to politicians who trusted these corrupt figures, he says:

“These facts may be another salvation for them that can help them put things right and initiate the long-awaited scientific debate of the public, to avoid that they too will be compared and tried with these criminal charlatans.”

The international legal coalition will become operational this month.

Also, the commission is trying to take protective measures such as protecting regional agricultural structures, securing a regional currency to prevent a new currency from being assigned “from above,” and working to rebuild a new media landscape that offers truly independent information.

For latest updates about the tribunals and more, we recommend to follow our Telegram channel